Pompeo renews call for end to isolation of Qatar 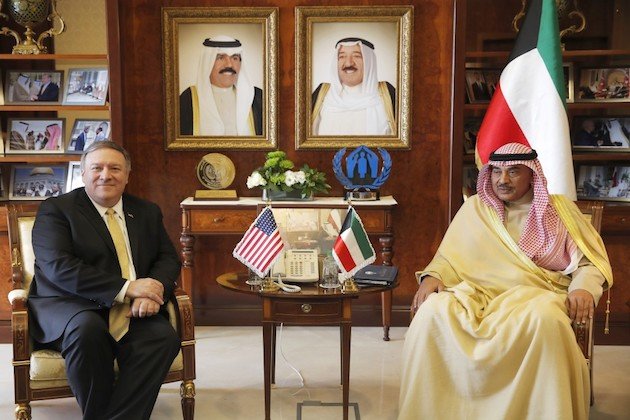 KUWAIT CITY, Kuwait  - U.S. Secretary of State Mike Pompeo has renewed a call for Gulf countries to settle their differences with Qatar, and bring it back into the fold.

The secretary is in Kuwait and made the call at a press conference after meeting with Kuwaiti Foreign Minister Sheikh Sabah Khaled Al-Hamed Al-Sabah on Wednesday.

"We need the Gulf countries working together on the complex set of challenges that face each of them," Pompeo tsaid Wednesday.

In mid-2017, Saudi Arabia, the United Arab Emirates, Bahrain and Egypt severed ties with Qatar over what the quartet described as support for terrorism. It also accused Doha of using the state-owned Al-Jazeera network of attempting to influence political oiutcomes.

The drama began after an announcement by the Qatar emir critical of other Gulf states, however it was later proved the announcement was false and had been originated to discredit Qatar. The FBI was called in by Doha to help track down the perpetrators.

Kuwait meantime has tried to bring the sparring countries back together, arguing the importance of a united Arab world.

"We are working to help those countries find a set of common ground," Pompeo said Wednesday.

"We all have the same set of threats, the threats from al-Qaeda and from ISIS, the threat from the Islamic Republic of Iran."

"We all are working diligently to find a path forward so that the rift between those countries can be resolved," he said.

Discussions in Kuwait between the two foreign ministers covered other topics as well including the situations in Syria and Yemen. The secretary also took the opportunity to thank the Kuwait government and people for their good condolences at the recent passing of former G{resident George HW Bush, who lead a coalition to free Kuwait from Iraqi forces under Saddam Hussein in 1990/91.

"I'd be remiss too if I didn't thank the leaders and people of Kuwait for their many tributes to late President George H.W. Bush, who left us last November. His leadership and defense of Kuwait and the principle, helping friends confront international aggression, will never be forgotten," Pompeo said.

"This dialogue has helped produce the highest level of cooperation between our two countries since American coalition allies liberated Kuwait now almost three decades ago. Today marks another step forward in our strong bilateral relationship."