Assange hit with new charges, could see him jailed for 175 years 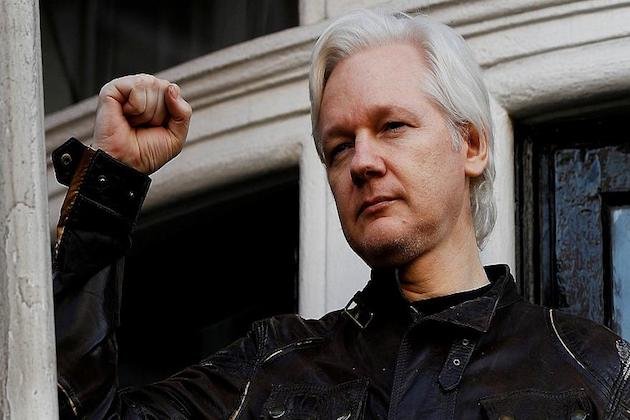 WASHINGTON DC - A federal grand jury has returned an 18-count superseding indictment against Julian Assange,  the founder of WikiLeaks, who is being held in a London prison awaiting extradition charges.

The indictment adds 17 charges to the single charge on which Assange was hit with on the day he was dragged from the Ecuador embassy in London by British police, shortly after the Ecuadorian government gave him up..

The WikiLeaks founder, who is 47, is being charged with offenses that relate to his alleged role in what the U.S. justice department describes as one of the largest compromises of classified information in the history of the United States.

If convicted of all of the charges he would face a maximum time in prison of 175 years.

The indictment alleges Assange with Chelsea Manning, a former intelligence analyst in the U.S. Army, obtained and disclosed classified documents related to the national defense of the United States. Specifically, it is alleged Assange  conspired with Manning;  obtained from Manning and assisted her in obtaining classified information with reason to believe that the information was to be used to the injury of the United States or the advantage of a foreign nation.

After agreeing to receive classified documents from Manning and causing Manning to provide classified documents, the indictment says Assange then published on WikiLeaks classified documents that contained the unredacted names of human sources who provided information to U.S. forces in Iraq and Afghanistan, and to U.S. State Department diplomats around the world.  These human sources included local Afghans and Iraqis, journalists, religious leaders, human rights advocates, and political dissidents from repressive regimes.  The court document alleges Assange's actions risked serious harm to U.S. national security to the benefit of its adversaries and put the unredacted named human sources at grave and imminent risk of serious physical harm and/or arbitrary detention.

Astonishingly, the 37-page indictment does not detail a single instance of any individual or group, or of any party that was actually harmed as a result of the publication of the documents.

The indictment says that beginning in late 2009, Assange and WikiLeaks actively solicited U.S. classified information, including by publishing a list of "Most Wanted Leaks" that sought, among other things, classified documents.  Manning responded to Assange's solicitations by using access granted to her as an intelligence analyst to search for U.S. classified documents, and provided Assange and WikiLeaks with databases containing approximately 90,000 Afghanistan war-related significant activity reports, 400,000 Iraq war-related significant activities reports, 800 Guantanamo Bay detainee assessment briefs, and 250,000 U.S. Department of State cables.

Many of these documents were classified at the Secret level, meaning, said the court document, that their unauthorized disclosure could cause serious damage to United States national security.  Manning also provided rules of engagement files for the Iraq war, most of which were also classified at the Secret level and which delineated the circumstances and limitations under which U.S. forces would initiate or conduct combat engagement with other forces.

The indictment alleges that Manning and Assange engaged in real-time discussions regarding Manning's transmission of classified records to Assange.  The discussions also reflect that Assange actively encouraged Manning to provide more information and agreed to crack a password hash stored on U.S. Department of Defense computers connected to the Secret Internet Protocol Network (SIPRNet), a United States government network used for classified documents and communications.  Assange is also charged with conspiracy to commit computer intrusion for agreeing to crack that password hash.

Manning, who was convicted on similar charges by a court martial and sentenced to 35 years in prison, was released in 2017 after serving seven years, as a result of a pardon by former U.S. President Barack Obama. Manning is currently in prison, for the second time this year, charged with contempt of court after refusing to testify to the Virginia Grand Jury against Assange.

"Some say that Assange is a journalist and that he should be immune from prosecution for these actions," Assistant Attorney General for National Security John C. Demers said Thursday at the announcement of the indictment. "The department (of Justice) takes seriously the role of journalists in our democracy and we thank you for it. It is not and has never been the department's policy to target them for their reporting."

"Julian Assange is no journalist. This made plain by the totality of his conduct as alleged in the indictment-i.e., his conspiring with and assisting a security clearance holder to acquire classified information, and his publishing the names of human sources. Indeed, no responsible actor-journalist or otherwise-would purposely publish the names of individuals he or she knew to be confidential human sources in war zones, exposing them to the gravest of dangers. And this is just what the superseding indictment charges Julian Assange with doing. The new charges seek to hold him responsible in light of the full breadth of his illegal conduct," Demers said.

Assange, the Department of Justice said in a statement, is presumed innocent unless and until proven guilty beyond a reasonable doubt.  If convicted, he faces a maximum penalty of 10 years in prison on each count except for conspiracy to commit computer intrusion, for which he faces a maximum penalty of five years in prison.  Actual sentences for federal crimes are typically less than the maximum penalties.  A federal district court judge will determine any sentence after taking into account the U.S. Sentencing Guidelines and other statutory factors.

For the case to be heard a British court will need to agree to Assange to be extradited to the United States. Since the initial indictment on a single charge, prosecutors in Sweden have also applied to Britain for extradition of Assange to face questioning in relation to sexual assault charges.

Seventy British MPs and Peers have signed a letter urging the Home Secretary to give priority to Sweden over the U.S.

A spokesman for the Home Secretary said consideration would need to be made on the basis of the severity of the charges and the dates of the warrants.

Sweden, by some years, applied for Assange's extradition first, however a year ago it said the warrant for his arrest had expired due to statutory limitations. On 13 May Sweden's deputy director of public prosecutions, Eva-Marie Persson, said the country would reopen the case and again applied for extradition.

Assange, an Australian, meantime is holed up in a British prison serving a 50-weeks term for breaching bail conditions.

Countries across the globe re-thinking reopening as coronavirus surges

As coronavirus cases around the world approach 11.5 million, governments are struggling with how to reopen their economies, leading some ...

North Dakota pipeline supported by Trump ordered to be closed

A U.S. federal judge ruled Monday that a controversial pipeline that runs through Native American lands in North Dakota be ...

One of the lessons the current coronavirus pandemic has taught us is that we depend on electronic devices more than ...

Yair Netanyahu making name for himself at home and abroad

JERUSALEM - As scandal-plagued Prime Minister Benjamin Netanyahu stands trial for corruption, his 28-year-old son has emerged as a driving ...

WASHINGTON, DC - Broadway actor Nick Cordero, aged 41, has passed away after a long battle with coronavirus.According to Variety, ...

Countries across the globe re-thinking reopening as coronavirus surges

As coronavirus cases around the world approach 11.5 million, governments are struggling with how to reopen their economies, leading some ...

North Dakota pipeline supported by Trump ordered to be closed

A U.S. federal judge ruled Monday that a controversial pipeline that runs through Native American lands in North Dakota be ...

Yair Netanyahu making name for himself at home and abroad

JERUSALEM - As scandal-plagued Prime Minister Benjamin Netanyahu stands trial for corruption, his 28-year-old son has emerged as a driving ...

WASHINGTON, DC - Broadway actor Nick Cordero, aged 41, has passed away after a long battle with coronavirus.According to Variety, ...