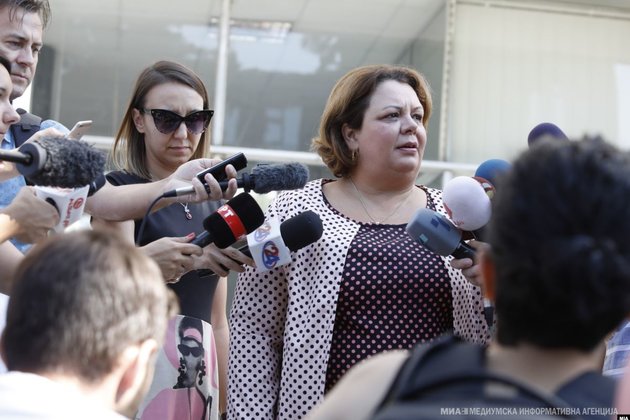 SKOPJE -- Police in North Macedonia have detained the outgoing special prosecutor in charge of investigating organized-crime cases after she was named as a suspect in a high-profile graft scandal.

State Prosecutor Ljubomir Joveski told journalists that Katica Janeva was detained on August 21 on suspicion of 'abuse of office,' a day after she was questioned by prosecutors for four hours.

Janeva has denied any wrongdoing and declared she felt 'no guilt.'

A court now has to decide whether to send her to custody pending the investigation.

Janeva resigned as special prosecutor last month amid allegations of her involvement in a scheme to take money from a businessman charged by her office over corruption allegations. She remains in the post until a successor is appointed.

The scandal has undermined the credibility of North Macedonia's anti-corruption drive as the Balkan country is hoping to open accession talks with the European Union in October.

It all began in July, when businessman Bojan Jovanovski and his alleged accomplice, Zoran Milevski, were arrested on suspicion of extorting money from another businessman.

Jovanovski and Milevski are accused of taking 1.5 million euros ($1.66 million) from Orce Kamcev in exchange for a promise to help him receive a lighter sentence in another case by using their alleged influence over Janeva.

Earlier this month, the Italian newspaper La Verita published recorded conversations purportedly between Kamcev and Jovanovski in which Janeva's voice could also be heard. Janeva claimed the conversation was unrelated to the case.

Addressing the press conference in Skopje, Joveski said that Janeva was suspected of 'using her official position and authority [to] obtain substantial benefits for herself and for others.'

The prosecutor said the investigation so far had produced no evidence that any of the money Kamcev allegedly gave to Jovanovski and Milevski had ended up in the pockets of politicians.

The scandal has rocked the government of Prime Minister Zoran Zaev, whose name was also mentioned in the recordings.

Zaev, who has pledged to root out widespread graft, has denied any connection with the scandal.

The special prosecutor's office was created in 2015 to investigate high-level crime.

Judicial reforms and tackling corruption are key criterions for countries seeking to join the EU.

With reporting by Reuters, Balkan Insight, AP, and AFP

U.S.-India trade deal not expected during Trump visit next week

WASHINGTON, DC - President Donald Trump has signalled that a "big trade" deal might not be on the agenda during ...

The federal judge in the Roger Stone trial is refusing to postpone sentencing while President Donald Trump says the conviction ...

NEW YORK, New York - Amazon founder Jeff Bezos says he will give $10 billion of his own money to ...

It is a craven, indefensible choice. On Tuesday, European Union foreign ministers agreed to launch a mission in the Mediterranean ...

DAMMAM, Saudi Arabia - A baby boy kidnapped from hospital 3 hours after he was born more than twenty years ...

China: Covid-19 Not as Deadly as Other Coronaviruses

GENEVA, SWITZERLAND - China has published new data on more than 44,000 confirmed cases of Covid-19, which show the disease ...