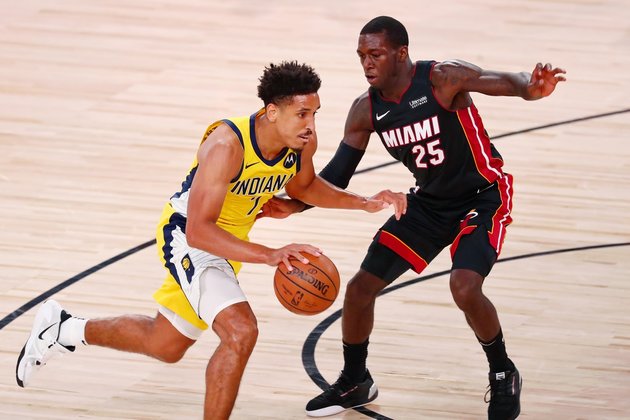 The Indiana Pacers earned the right to be the "home" team to begin their first-round playoff series with the Miami Heat by beating their Eastern Conference rival 109-92 on Friday afternoon in their regular-season finale near Orlando.

Aaron Holiday bombed in a pair of 3-pointers in a game-opening 21-7 flurry that gave Indiana (45-28) a lead for good in a matchup of teams that entered the game tied for fourth place in the East.

The Pacers and Heat (44-29) will next play in a best-of-seven playoff series, beginning Tuesday. Despite the loss, the Heat won the season series 3-1.

Indiana will enter the postseason as the fourth seed in the East, while Miami will be No. 5.

With nothing at stake other than the color of jerseys for the playoff opener, the Pacers played without T.J. Warren, Domantas Sabonis, Victor Oladipo and Myles Turner. The Heat rested Jimmy Butler, Goran Dragic, Bam Adebayo, Jae Crowder and Andre Iguodala.

The loosely played game featured one scary and one memorable moment.

The scary moment occurred when Heat swingman Derrick Jones Jr. took a hard fall in the third quarter and had to be tended to on the court for several minutes. Fearing a neck injury, he was taken off the floor on a stretcher. The seriousness of his injury wasn't immediately known.

Jones played in all eight Heat games since the restart, totaling 46 points.

A lighter scene resulted when Heat veteran Udonis Haslem connected on his first 3-point basket since 2018. The 17-year veteran is now 5-for-58 from beyond the arc in his career.

Doug McDermott led the way for the Pacers with 23 points. Malcolm Brogdon, one of the few regulars who saw action in the game, added 16, while both Aaron and Justin Holiday chipped in with 11, as did Alize Johnson. JaKarr Sampson made it six players in double figures for Indiana with 10 points.

Johnson was the game's leading rebounder with a career-best 17, while T.J. McConnell accumulated a game-high eight assists.

The win was the Pacers' sixth in eight games since the NBA restart.

Kendrick Nunn matched McDermott's 23-point total to share game-high scoring honors for the Heat, who lost for the fifth time in their eighth rescheduled games.

WASHINGTON, DC - U.S. Supreme Court Justice Ruth Bader Ginsburg who has been regarded as an iconic champion of women's ...

The lack of grandeur is startling now, the two yellowed, typewritten pages chronicling a small after-hours business meeting bearing no ...

Nearly two thirds of U.S. restaurant closures will be permanent

The United States doesn't want to engage in warfare in space, but like in all domains, the U.S. military must ...

Interest rates in U.S. to remain low for next three years, says Fed

Interest rates are expected to stay at or near zero through 2023, the Federal Reserve said Wednesday.Announced as the U.S. ...

BURLINGTON, Vermont - A federal grand jury in the District of Vermont in the United States returned a third superseding ...

WASHINGTON, DC - U.S. Supreme Court Justice Ruth Bader Ginsburg who has been regarded as an iconic champion of women's ...

The global hunger crisis caused by conflict and now compounded by COVID-19 is moving into a dangerous phase, the head ...

Exploring the most promising locations for extra-terrestrial life

The Earth's biosphere contains all the known ingredients necessary for life as we know it. Broadly speaking these are: liquid ...

The lack of grandeur is startling now, the two yellowed, typewritten pages chronicling a small after-hours business meeting bearing no ...

Number of children living in poverty rises to 1.2 billion

The Covid-19 pandemic has caused a major rise in child poverty across the world. In a new UNICEF and Save ...

Iranian government lashes out at Pompeo over human rights remarks