Kahale Warring goes on IR but could be back soon 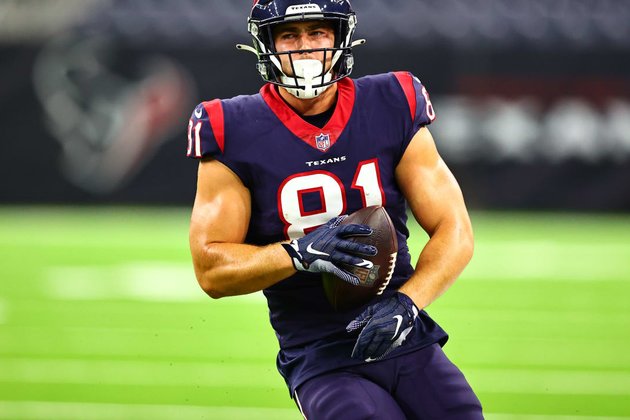 The Houston Texans placed Kahale Warring on injured reserve Tuesday. The second-year tight end made his NFL debut on Thursday night at Kansas City on special teams, after having a strong training camp.

"Kahale had a couple things going on injury-wise so we felt like to put him on IR for let's just call it three weeks, see where he's at after three weeks," head coach and general manager Bill O'Brien said Wednesday. "We felt like that would help him where he is injury-wise. So, that was the decision we made yesterday. It really kind of happened on Monday and so that's why it was made yesterday so that's where it's at."

The Texans signed Pharaoh Brown (6-6, 258) from the practice squad to the active roster in the corresponding transaction. Brown, in his third season out of Oregon, played nine games with six starts for the Cleveland Browns last year after spending his first two seasons with the Raiders.

"Pharaoh Brown was in Cleveland, he's been in Oakland and we just felt like he would be a guy that we thought could potentially help us, so we brought him on to the roster," O'Brien said.

The 2020 NFL rules now allow players going on injured reserve to return after missing only three weeks. Teams may also return an unlimited number of players from IR throughout the year. Prior to 2020, IR players could only return after missing at least six weeks of practice and eight games.

Houston will host its home opener on Sunday without fans at NRG Stadium. Kickoff against the Ravens is set for 3:25 p.m. CT on CBS and SportsRadio 610.

NEW DELHI - India and the U.S. held a "productive" and "successful" third round of 22 dialogue in New Delhi, ...

WASHINGTON, DC - The U.S. Federal Communications Commission (FCC) is proposing a rule change that would require television and radio ...

Washington DC [US], October 30 (ANI): Amid the growing tensions, US and China completed two-day virtual conference to inaugurate the ...

Chinese stocks gain for third day in row, most other Asian markets dip

SYDNEY, NSW, Australia - Asian investors on Thursday ignored the ructions overnight on Wall Street and around the globe, keeping ...

Britain and India shore up economic and financial ties

LONDON, UK - Britain and India entered into a range of agreements on Wednesday to solidify their relationship and promote ...

Won't You Be My Neighbor?