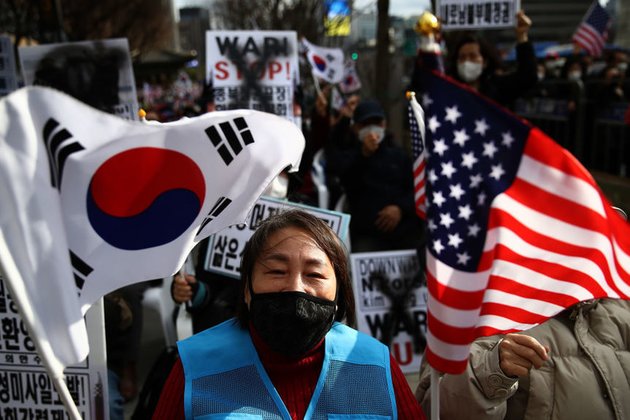 The US and South Korea have prepared for an ?imminent? North Korea ?provocation?

Seoul and Washington have a "plan B" in case the DPRK chooses to conduct a nuclear test during US President Joe Biden's three-day visit to South Korea, the first deputy chief of the South Korean presidential National Security Office, Kim Tae-hyo, said at a press briefing on Wednesday.

Speaking about the agenda of Biden's visit, which is due to start on Friday, Kim said that his country believed the likelihood of North Korea carrying out a nuclear test over the next few days was "relatively low." However, as Pyongyang's preparations for an intercontinental ballistic missile (ICBM) launch were "believed to be imminent," both South Korea and the United States should be prepared for this type of "provocation," whether it was "big or small," Kim argued.

Therefore, "a plan B" has been set up "so that the leaders of South Korea and the United States would immediately enter the command-and-control system of the combined defense posture," he said.

Earlier this month, the White House did not rule out the possibility of Pyongyang conducting a nuclear test - the first since September 2017 - to coincide with Biden's Asia trip. As Reuters reported, citing an unnamed US official, North Korea could carry out an ICBM test as soon as Thursday or Friday.

During his visit, Biden is scheduled to conduct one-on-one talks with South Korea's newly-elected president, Yoon Suk-yeol, and to attend meetings on economic and national security. He is also expected to visit Samsung Electronics' semiconductor plant in Pyeongtaek, 70 kilometers (43 miles) south of Seoul.

"President Biden's visit to Korea will serve as an opportunity to strengthen the Korea-US alliance into a comprehensive strategic alliance," Kim said.

A meeting with North Korean leader Kim Jong-un is not on the agenda.

"President Yoon and President Biden's position is that the door is open for dialogue at any time, but they will not respond to a meeting for the purpose of meeting," Kim said.

Yoon has pledged to adopt a harder stance against the DPRK's "provocations."

While Biden's predecessor, Donald Trump, repeatedly met with North Korean leader Kim Jong-un in an effort to convince Pyongyang to denuclearize, Biden has chosen to revive the policy of previous presidents, demanding a total shutdown of the country's nuclear program before even considering the loosening of sanctions.

Last month, the DPRK warned that it would take decisive action to "crush" any "hostile" foreign power "at the fastest possible speed." It also pledged to continue its nuclear program in order to protect itself in case of an attack or, if needed, to use such weapons "preemptively."

Pyongyang has held 16 missile launches so far this year, including an ICBM set off in March, but has not conducted any nuclear tests since September 2017.