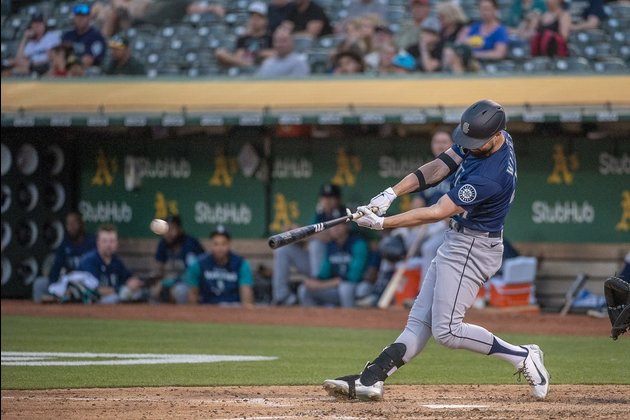 Marco Gonzales worked seven strong innings and the Seattle Mariners got consecutive home runs from Julio Rodriguez, Jesse Winker and Eugenio Suarez in a five-run seventh to break open an 8-2 victory over the host Oakland Athletics on Tuesday night.

Taylor Trammell also homered for the Mariners, who had lost three in a row.

Promoted from Triple-A Las Vegas earlier in the day, Nick Allen belted his first career homer, a two-run shot, to account for all the Oakland scoring.

Allen's seventh-inning homer, which came in his 11th big-league game, ended a shutout bid by Gonzales (4-7), who allowed seven hits and one walk in his seven innings. He struck out two.

The left-hander won for the first time in five starts, dating back to a 7-6 home win over the A's on May 23.

Oakland starter James Kaprielian (0-5) matched zeros with Gonzales for two innings before Trammell led off the third with his third homer of the season.

Winker doubled home Rodriguez to make it 2-0 in the sixth before Seattle pulled away in the seventh after Kaprielian had been lifted. The right-hander was charged with two runs on five hits in 5 1/3 innings with two walks and seven strikeouts.

With Oakland down just 2-0, reliever Kirby Snead nearly worked out of his own mess in the seventh by getting a double play after two inning-opening walks.

However, Austin Pruitt came on and served up an RBI single to Ty France before Rodriguez bombed his ninth homer, Winker his fifth and Suarez his 13th consecutively, opening a 7-0 lead.

Justin Upton completed the scoring with an RBI single in the ninth.

Erik Swanson and Ken Giles, making his Mariners debut, wrapped up a seven-hitter for the Mariners with a hitless inning apiece.

Rodriguez and France had three hits apiece, Rodriguez and Winker two RBIs each and Rodriguez, France and Trammell two runs apiece for the Mariners, who had been shut out by the Los Angeles Angels in each of their last two games.

The loss was the Athletics' 19th in their past 23 games. Jonah Bride and Cristian Pache had two hits apiece for Oakland.

TikTok is not handing over American users' data to China: CEO

Beijing [China], July 2 (ANI): TikTok, a 15-second video platform, has told US senators that it is taking all necessary ...

Study: Screening of parental depression has potential to identify families in need of support

New Jersey [US], July 2 (ANI): Screening mothers and fathers for depression beyond their child's first birthday in pediatric offices, ...

Will Australia come under fire as China prepares for showdown with US in West Pacific?

Canberra [Australia], July 2 (ANI): Australia seems to be in the firing line as US and China come closer to ...

Florida Panthers forward Anthony Duclair underwent successful surgery to repair his Achilles tendon and is expected to return midway into ...

Tokyo suffers through heatwave, worst since 1875

DUBAI, UAE: The Arab states have built significant amounts of solar and wind power installations, and are in line to ...

LONDON, England: A second referendum on Scottish independence is set to be held in October 2023. The Scottish government, led ...

14 ft. crocodile captured by man in Indonesia, returned to nature

SULAWESI, Indonesia: Using just a rope, an Indonesian man, supported by fellow villagers on the island of Sulawesi, captured a ...