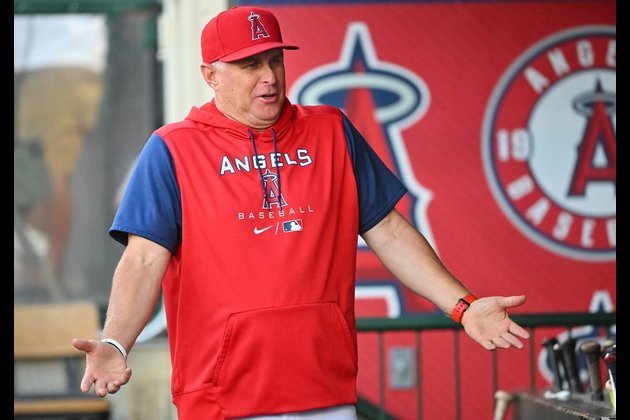 Los Angeles Angels interim manager Phil Nevin will try to put together a lineup that will rejuvenate his team when the Angels host the Seattle Mariners on Saturday night in Anaheim, Calif.

The Angels fired manager Joe Maddon on June 7, 12 games into a club-record 14-game losing streak. Now, withFriday's 4-3 loss to the Mariners, the Angels are 7-10 under Nevin.

There have been plenty of reasons for the club's downward spiral, and one of those was the season-ending wrist injury to third baseman Anthony Rendon.

Matt Duffy has gotten most of the starts at third base since then, but Nevin is looking for help anywhere he can get it. One possibility is David MacKinnon, who was hitting well at Triple-A Salt Lake when he was promoted to the big club last Saturday.

Finding playing time for MacKinnon might be difficult, though. MacKinnon is a first baseman, a spot occupied by Jared Walsh, who was an All-Star in 2021 and trails only Mike Trout and Shohei Ohtani in home runs (13) and RBIs (40).

And the designated hitter spot is held by Ohtani.

Third base would be the ideal spot for MacKinnon, but he hasn't played third since college. He did play one game at second base last season at Double-A Rocket City, but at 6-foot-2, 200 pounds, he looks more like a corner infielder.

The knock on MacKinnon coming out of college at Hartfoed was his lack of power considering his size, but an injury and a bout with COVID-19 in the past of couple years while in the Angels' minor league system gave him extra time to study video, and he said those sessions have helped.

"I literally studied Mike Trout's swing, which is crazy because now he's my teammate," MacKinnon said. "And Vlad (Guerrero) Jr.'s swing. I got to the point of, these guys are really good at holding the ground, using the force of the ground to further their power, getting to a consistent position when they land their front foot.

"I was like, if I can do that more consistently -- I'm not trying to be like Mike Trout and do it as consistently as he does it -- I think I can tap into a little more power."

Left-hander Patrick Sandoval (3-2, 2.70 ERA) will be on the mound for Los Angeles to make his 12th start of the season, coming off a no-decision in his last start, also against the Mariners, when he gave up one run and four hits in six innings.

Mariners first baseman Ty France was not in the lineup Friday and his availability remains uncertain after he injured his left elbow in a collision at first base on Thursday against the Oakland Athletics. Initial X-rays were negative, but results of an MRI on Friday were pending.

"I'm still concerned," Mariners manager Scott Servais said. "We're not out of the woods by any means. Certainly, he's a key cog in our offense. He's been so consistent all year long. You know what you're going to get from him every day, and not having him in there is going to be tough. Hopefully it's just a short amount of time."

Right-hander Logan Gilbert (7-3, 2.28) will start for Seattle, coming off a loss in his most recent start after giving up two runs and four hits in six innings against the Angels on Sunday.