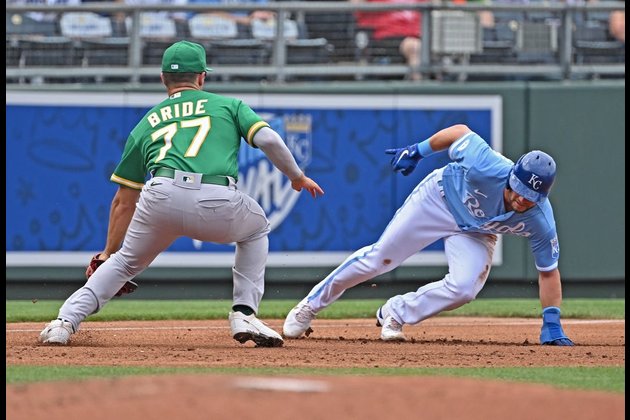 Tony Kemp had two doubles and a home run as the Oakland A's defeated the Royals, evening the three-game series in Kansas City with a 9-7 victory on Saturday.

Zach Jackson (2-2) picked up the win for Oakland. Lou Trivino earned his third save.

Neither starter lasted five innings. Jared Koenig, who earned his first career win against the Royals last Sunday, was pulled with two outs in the fifth after allowing three runs on five hits.

The A's got two runs on two hits in the first inning after Kemp led off with a double.

In the third, Oakland loaded the bases with no outs, but only scored on an RBI groundout by Brown.

The Royals got on the board in the home half of the third on Witt's 11th home run of the season.

The A's answered with two in the fourth. Elvis Andrus reached on a one-out double that was lost in the sun by Edward Olivares in right. He scored on a double by Nick Allen, and Jonah Bride then drove in Allen with a two-out single.

Cam Gallagher's two-out, two-run double in the fourth drew the Royals closer. Gallagher came through again in the sixth with an RBI double, scoring Michael A. Taylor.

The A's got a little insurance in the seventh when Brown led off with a double, then scored on a single by Murphy. Kemp then seemingly iced the game with a two-run home run in the eighth.

Taylor hit a 414-foot home run in the bottom of the frame to draw the Royals within one run.

A wild pitch in the ninth gave Oakland its final run.