Royals' Edward Olivares out to make good impression vs. A's 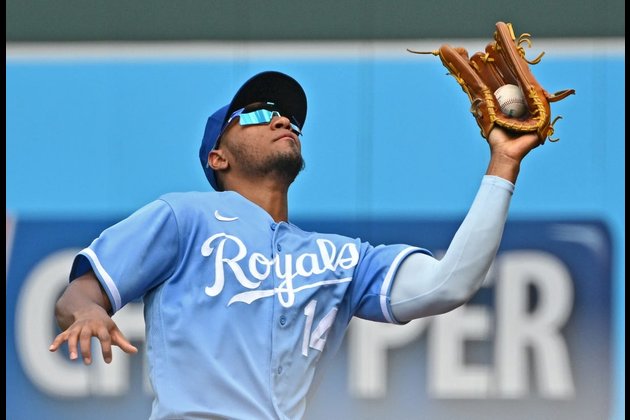 The first goal for a professional baseball player is to make it to the majors. The second goal is to stay.

Olivares is expected to be in the Kansas City lineup as the Royals host the Oakland Athletics Sunday afternoon in the finale of a three-game series. The Royals will send Brady Singer (3-2, 4.34 ERA) to the mound to oppose Oakland's James Kaprielian (0-5, 5.98) in a clash of right-handers.

The A's took an early lead Saturday and held off several Royals challenges, earning a 9-7 victory. Sunday's game will be for the series.

Olivares returned to the Royals Friday night after missing 43 games with a right quad strain. He hit two home runs -- his first two of the season -- and helped the Royals win 3-1.

He was rewarded by batting cleanup in Saturday's game. He struggled, going 0-for-5 with four strikeouts, but he's still carrying a lot of promise for the future.

"Some guys have that ability. It looks like they're reacting, rather than just sitting on a pitch. They get themselves get into a position they can handle anything. That's different."

Olivares was optioned to Triple-A Omaha eight times during the 2021 season, so he wants to stick around this year. He is hitting .349 through 17 games and undoubtedly hoping that will be good enough to unpack his belongings for good in Kansas City.

If the Royals are to continue their recent surge -- they've won six of nine -- it likely will be because of the success of their starting rotation. In the past 11 games, Kansas City starters combined for a 3.51 ERA (23 earned runs in 57 innings). They gave up 47 hits and struck out 55.

Singer has been part of the rotation's resurgence, even though he suffered his second loss of the season against the A's in a 4-0 loss last Sunday. He allowed three runs on six hits with four strikeouts in 5 1/3 innings. He left with two runners on in the sixth, and they scored on a three-run home run allowed by the bullpen.

Singer is 0-1 with a 4.76 ERA in two career starts against Oakland.

Kaprielian, who threw six scoreless innings in his only start against the Royals in June 2021, has been pitching better than his win-loss record would indicate. Oakland manager Mark Kotsay said Kaprielian's winlesss record is not all his fault, as is the case for the rest of his staff.

"Wins and losses are not always accurate," Kotsay said. "Our starters have done a good job pitching deep into games, giving us an opportunity to win games. It's a reflection more of our offense and lack of run production.

"Kap has had some good starts and some not-so-good starts. He's coming off a really good one and we're hoping he continues to throw strikes."

In his most recent outing against the Seattle Mariners, he allowed two runs on five hits in 5 1/3 innings but took the loss in an 8-2 game on Tuesday.

"He's had some command issues," Kotsay said. "Sometimes it's mechanics and sometimes it's confidence. But he only had two walks and seven strikeouts against Seattle."