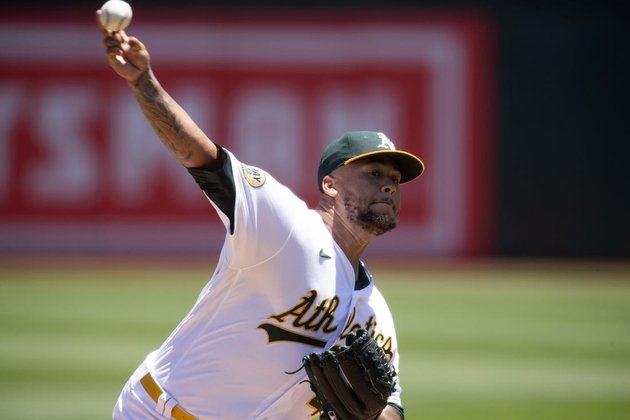 Over the past three games, the New York Yankees experienced getting no-hit for the first time in 19 years, being held hitless into the seventh inning before earning a dramatic win and capitalizing on an opposing catcher getting called for interference twice in the same inning.

Those circumstancescreated some unique events for the Yankees, whose 23 comeback victories lead the majors as they seek another series victory on Tuesday night when they host the Oakland Athletics.

The Yankees were no-hit for the first time since June 11, 2003, on Saturday, when they could not break through against Houston's Cristian Javier, Hector Neris and Ryan Pressly. A day later, they had no hits for 6 1/3 innings -- until Giancarlo Stanton homered, and New York emerged with a 6-3 win when Aaron Judge hit a three-run homer in the 10th inning.

Judge and Stanton factored into a 9-5 comeback win on Monday vs. the A's, as they were batting when Oakland catcher Sean Murphy was charged with interference twice in the seventh inning.

DJ LeMahieu was on first base when Judge reached on the first error. After Anthony Rizzo was plunked. LeMahieu scored when Murphy committed his second miscue.

"We felt good about our chances to come back and win," Donaldson said. "At the end of the day, we believe in our lineup and we believe in our ability to score runs. We really feel like we're not out of the game."

Oakland's defensive mistakes undid one of its most productive innings of the season. Ramon Laureano hit an RBI double, Elvis Andrus hit a bases-clearing double and Sheldon Neuse had an RBI single in a five-run third, but the A's never added on and wound up lamenting what unfolded in the seventh from their Gold Glove catcher.

Oakland heads into Tuesday with 18 losses in its past 23 games. The A's also have scored 19 times in their past three games, one more than their total from the 11 contests that preceded these games.

Frankie Montas (3-7, 3.21 ERA), who is 1-6 with a 3.11 ERA over his past 12 starts, takes the mound for Oakland five days after nearly getting a no-hitter. Before taking a no-decision in Oakland's 2-1 loss to the Mariners on Thursday, Montas held Seattle hitless through seven innings and wound up throwing eight scoreless innings.

Montas has consistently received little run support. His flirtation with a no-hitter marked the eighth time in his 15 starts that Oakland scored one run or none.

Montas is 1-0 and has tossed eight shutout innings in two career appearances against the Yankees. In his last start against New York, Montas allowed two hits in seven scoreless innings of a 3-2 win on Aug. 28 in Oakland.

JP Sears (2-0, 0.00 ERA) will be recalled by the Yankees from Triple-A Scranton/Wilkes Barre for his fourth appearance and second spot start. In his first spot start, Sears allowed three hits in five innings of a 2-0 win over the Baltimore Orioles on May 25.