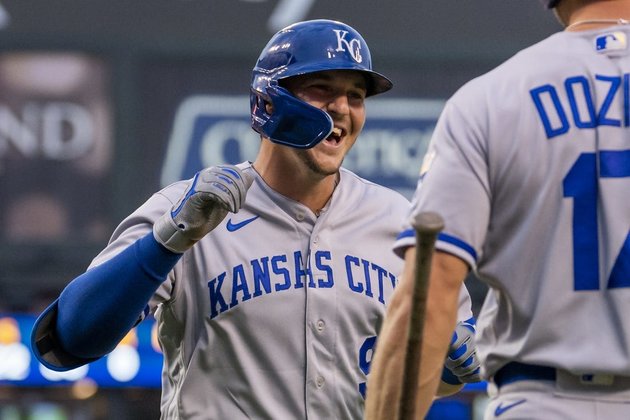 Vinnie Pasquantino gave the visiting Kansas City Royals a jolt in the opener of a three-game series against the Detroit Tigers on Friday.

Playing in his third major league game, Pasquantino lined a home run for his first hit to help the Royals collect a 3-1 victory over the Tigers. The American League Central rivals will play the middle game of the series on Saturday afternoon.

Pasquantino's fourth-inning homer off Michael Pineda wasn't a no-doubter. It bounced off the top of the wall and then struck the railing in front of the stands. It had to be reviewed on replay before it was officially declared a home run.

"I'm about halfway to second and I'm about to get thrown out. I don't know what just happened," Pasquantino said after the game. "I kind of slid in and (Detroit shortstop Javier Baez) told me it was a homer. But the umpire told me it was an out. And then we figured it out and it ended up being a homer."

Pasquantino had 18 homers for Triple-A Omaha before getting called up this week. The Royals opened up a spot in the lineup by trading veteran Carlos Santana to the Seattle Mariners.

"It's been a whirlwind for sure, and I'm just learning," Pasquantino said. "That's what the big leagues is all about. You're not a finished product just because you're in the big leagues. I'm trying to learn every day and soak up as much as I can from these veteran guys around me."

Pasquantino will face one of the Tigers' rookies on Saturday.

Beau Brieske (1-6, 4.55 ERA) will make his 13th start for Detroit. Following two outings in which he didn't allow a run, Brieske has been knocked around in his past two starts. The right-hander gave up four runs and six hits in five innings against the Boston Red Sox on June 21, then five runs and five hits in 3 2/3 innings against the Arizona Diamondbacks on Sunday.

"He yanked a lot of fastballs out over the plate," Tigers manager A.J. Hinch said after the Sunday contest. "It got to the point where, for us to win that game, we needed to get out of the situation in the fourth, and we didn't."

Brieske will be facing Kansas City for the first time.

The Royals announced a late change to their pitching plans for the rest of the series, moving up Kris Bubic (1-5, 7.45 ERA) to Saturday and pushing Brady Singer to Sunday.

Bubic got knocked out after 4 2/3 innings on Monday against the Texas Rangers, having allowed seven runs (four earned) on nine hits. He struck out three and walked two.

Singer last pitched on Sunday, when he lost to the Oakland A's after allowing five runs (four earned) on seven hits in 8 1/3 innings.

Bubic went 1-2 with a 4.62 ERA in five June starts. Those aren't great numbers, but they are a step up from his April and May results: 0-3 with a 12.83 ERA, results that earned him a four-week demotion to Triple-A Omaha.

The Tigers will hope they can improve on their situational hitting on Saturday after going 0-for-12 with runners in scoring position in the series opener. They left 10 runners on base.

Detroit first baseman Spencer Torkelson was hit by a pitch in the seventh inning on Friday and was taken out of the game. His helmet protected him from getting hit in the jaw. Hinch said Torkelson wouldn't start on Saturday but might be available off the bench.

"It's scary when anybody gets hit up near the head," the manager said. "Luckily he had that new guard (on his helmet) that guys are wearing that covers the beginning of his chin. I think his shoulder pushed it up and it protected his face. All signs are pointing positive now."