Sean Murphy does it all as A's beat Shohei Ohtani, Angels 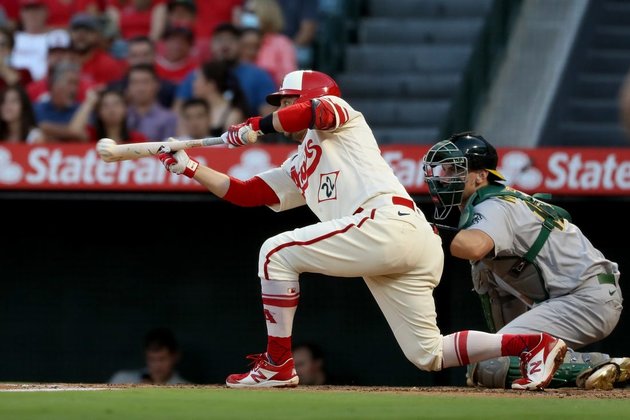 Sean Murphy homered and drove in all three Oakland runs to lead the Athletics to a 3-1 victory over the Los Angeles Angels on Wednesday night at Anaheim, Calif.

Luis Rengifo and Magneuris Sierra each had two hits as Los Angeles lost for the fourth time in its past six games. The Angels were just 1-for-10 with runners in scoring position.

Ohtani (9-7) lost his third consecutive start. He allowed three runs (two earned), seven hits and one walk in 5 2/3 innings while dropping to 2-3 against Oakland in seven career starts.

Ohtani struck out seven to see his streak of double-digit strikeout performances end at six. That left him one shy of the franchise record set by legendary Nolan Ryan in 1977.

Ohtani, who also was the designated hitter, was lifted for pinch-hitter Kurt Suzuki with two outs in the seventh and Los Angeles trailing 3-1. Angels manager Phil Nevin said after the game that Ohtani was removed because of a mild forearm cramp, according to The Athletic, and that he would serve as the team's designated hitter on Thursday.

Oakland's James Kaprielian (3-5) gave up one run and six hits over 5 1/3 innings. He struck out four and walked one.

Sam Moll recorded two outs in the sixth, A.J. Puk pitched a scoreless seventh, Domingo Acevedo tossed a perfect eighth and Zach Jackson struck out two during a flawless ninth for his third career save.

Ramon Laureano opened the sixth inning with a single to left. Murphy followed by hammering a 2-1 slider from Ohtani 395 feet over the fence in left to give the Athletics a 3-1 edge. It was Murphy's 13th homer of the season.

The bullpen protected the lead in stellar fashion as Oakland improved to 3-6 against the Angels this season.

The Athletics took a 1-0 lead in the fourth. Laureano reached on a throwing error by Rengifo, moved to second on Ohtani's wild pitch and scored on Murphy's single to right.

The Angels knotted the score in the fifth as Sierra reached on an infield hit, advanced twice on infield outs and scored from third on Rengifo's double to right-center field.